What is a lahar?
Lahar (also called debris flow) is an Indonesian word used by geologists to describe a mudflow or a water-saturated debris flow on a volcano. Technically, any flow that is not saturated should be referred to as a debris avalanche; however, lahar is the term most often used to describe any type of debris or mud flow on a volcano. Lahars are powerful forces capable of moving great quantities of debris - house-size boulders, trees, etc. for long distances in a short amount of time. They look and behave like flowing concrete and destroy or incorporate virtually everything in their path. The result of lahars is usually a deposit of sediment that can range anywhere from a few yards to hundreds of yards thick (Hoblitt and others, 1995:4). Topography greatly influences the direction of lahars, so developed regions located at the base of volcano valleys are in extreme danger. In addition, any reservoirs in the path of lahars could add to the threat. The debris carried in the lahars could quickly fill the reservoirs and release the previously contained water (Hoblitt and others, 1995:4).
Lahars develop from volcanic eruptions, glacial melting, and sector collapse but can also develop from earthquakes, steam explosions, and intense rainstorms (Hoblitt and others, 1995:4). All these possibilities exist in profusion on Mount Rainier’s steep slopes. Of all the risks associated with this volcano, the threat of lahars is certainly the greatest. Rainier’s history, as well as current eruptions elsewhere, can prove how destructive these lahars can be.
Lahars at Mount Rainier?
During the past 10,000 years, there have been at least 60 different lahars of various sizes originating from Mount Rainier (Hoblitt and others, 1995:5). There are now over 100,000 homes and over 200,000 Puget Sound residents that work in buildings located on these deposits (Krakauer, 1996:34). The largest of these lahars is the Osceola Mudflow that occurred approximately 5,600 years ago and extends to the Port of Tacoma including the areas now inhabited by the towns of Orting, Buckley, Sumner, Puyallup, Enumclaw and Auburn (Hoblitt and others, 1995:5). A more recent lahar, the Electron Mudflow, originated as a sector collapse from what is now known as the Sunset Amphitheater around 600 years ago. The deposits left from the Electron Mudflow are 30 yards deep at the beginning of the Puget Sound lowland area and at least 6 yards deep at the town of Orting (Hoblitt and others, 1995:5). The following hazard map illustrates the areas at risk from future lahar activity. 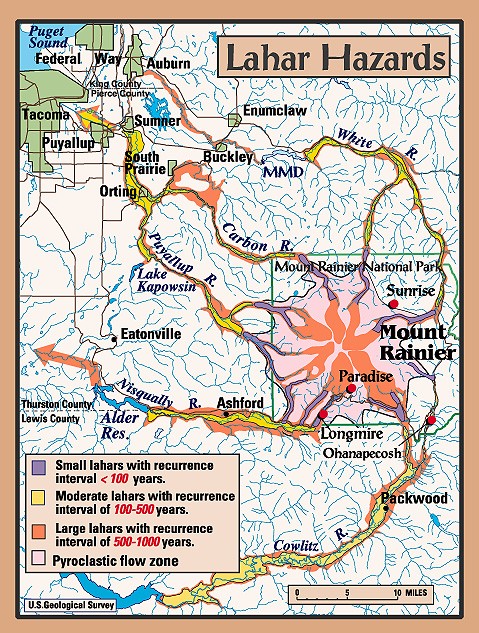 Tragedy!
Lahars are an all too common phenomenon of stratovolcanoes. One recent lahar disaster has many frightening parallels to Mount Rainier. Like Rainier, Nevado del Ruiz in Colombia had glacial caps, high relief and a long history of lahar activity. On September 13, 1985, Nevado del Ruiz released a lahar triggered by a glacial outburst from a small eruption the previous day. This lahar traveled at a speed of 10-30 km/hr down the Azufrado River valley (Milet and others, 1991:12) and buried the town of Armero and approximately 24,000 of its residence before they knew what was happening (Milet and others, 1991:68).

Return to Hazards That Could Occur Independent of an Eruption