What is Lava Flow?
Lava flow is an outpouring of hot, molten rock (magma) onto the surface of a volcano. Lava from a stratovolcano such as Mount Rainier is typically thick and slow moving. People and animals can generally escape a lava flow unharmed; however, lava will burn or bury everything in its path - trees, homes, roads, etc. (Hoblitt and others, 1995:4). 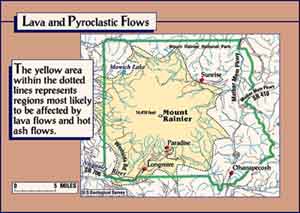 Lava flow at Mount Rainier?
According to the 1994 U.S. Geodynamics report to the National Research Council (33), lava flow from the summit of Mount Rainier is the most likely volcanic event to occur. In fact, all of Rainier's summit is composed of old lava from eruptions approximately 2,200 - 2,300 years ago (Sisson, 1998).
Geologic studies indicate that historically lava flow extends only as far as the valley immediately surrounding Rainier. Because of the slow moving characteristic of lava, people in Mount Rainier National Park should be able to be safely evacuated in the event of an eruption (Hoblitt and others, 1995:4). The above hazard map shows the areas that are most likely to be effected by lava flow from an eruption at Mount Rainier, most of which are within the park boundaries. The real danger to people and property from lava is the potential it has of heating the glaciers on Rainier. As shown in a later section, the melting of glaciers could lead to dangerous floods and lahars.

Next:
Continue with Pyroclastic Flow